We see them sometimes—
slender, almost gaunt, and hair tied back—
walking near the temples in the old part of the city;
other times shopping the Sunday Market
for vegetables and fruit, their cotton bags hanging
from forearms. Our age, but graying,
their skin rough and blotched from insect bites.
Hippies: American and European
exports searching for what home cannot provide.
In this city of constant stimulation,
they seldom talk, never smile.

Newlyweds, we’re exploring our new life.
A Brit neighbor told us about a street near
Erawan Shrine with shops that only sell
Buddhist religious items. We’ve learned

in this part of the world you buy tires
on the street of tire stores; for furniture,
it’s the street of furniture stores. For a gift
to a temple, or a nun, or monk, or an item
for your home, go to the street near the Erawan.
It’s hot season. We choose an air-conditioned shop.
In front, by the windows, it’s all statues of Buddha,
some standing, some seated on carved lotus bases.
For cool season, there are cloths to drape them.
And stacks of saffron-colored robes for monks.
We move up and down the aisles. Lots of brass,
like these strings of bells, and candle holders.
And boxes of candles and incense sticks.
Lacquered tables and wall altars gather at the back
of the shop near a cluster of embroidered ceremonial fans,
each upright in its teak stand. And gongs.
I’m standing in front of the gongs.

We’d heard one at Wat Po in cool season
when we went to hear the monks chant
evening prayers. Only heard it once,
struck softly: an intimate sound that faded
after it got our attention. They sat
in lotus position on a low platform, in dark
cool season robes, led by an elderly monk
in wire-rimmed glasses. We couldn’t
make out the words, but enjoyed the sound—
the clearness of the tenors, the lingering bass notes.

The clerk, in white shirt and black pants,
stands at a respectful distance with an usher’s reserve.
He provides a small striker to test the gongs.
I select one with a sound I like. It’s bronze and heavy,
painted black, with a lotus design etched on the front.
He writes the order on his pad in Chinese characters,
then carries it to the sales counter. The young assistant
in black skirt and white blouse, cuts brown paper
from the roll using small scissors like ones I remember
from grammar school. He lays the gong face down
for her to wrap and tie up with string. It’s like
an old-fashioned department store.

We removed our shoes at the temple door,
and sat cross-legged on woven mats
on the floor of the main chamber. I thought

of the sanctuary in the church at home.
Late day sun peered through tall windows
as though looking for a place to sit and rest.
The gong sounded, and rhythmically,
the monks recited the ancient words. A nun
in white robe, hair close-cropped,
sat with her mother and sisters around her.
She offered us cups of the tea they’d brought.
We nodded our gratitude. They smiled
and nodded encouragement.

Joining a new world, you compare
each day’s experiences to what you know.
We are deliciously lost.

The Man in the Red-Checked Shirt

I’m working down the clipboard’s pages: Employer Name. Phone Number. Occupation. Tedious. Good grief! There’s more on the back. I slide the sheet up on the board to keep writing.

Short, stubbed steps bring him into the room. A red-checked flannel shirt holds a belly that parts a tan windbreaker, and straight white hair below the bald spot points away. His round pink face could be jolly, but for the leftward cant of his head—as if leaning into heavy going. Thick-framed glasses, halfway down his nose, direct him to the floor ahead; his chin on his chest. He takes a seat in the center aisle. Stands up again to remove the jacket.

Emergency Contact Name. Relationship. Home Phone Number. How am I supposed to get this all done? It’s past my appointment time.

The inner door opens. A nurse reads his name off a manila file. He pushes up from the chair arms, and follows, both hands clutching the wad of his jacket to his chest.

What medications are you now taking, including dosage? I look at my watch.

The inner door opens and he returns, chin jutting forward. Head still tilted to the left, he heads for the front door, like a man taking a corner at high speed.

The Wisdom of Zoltar

Do not go gentle unto that good night,
reads the strip of paper from the fortune teller booth.
He’s got the moves: eyes, hand over the glowing ball,
mouth that moves to a Hungarian accent.

Would another quarter have gotten the quote right?
I know what the poem’s about.
Maybe it’s wrong for a reason? My last quarter.
What does Zoltar know? He wants more money.

I knew a woman who rented photo booths
to wedding parties— rendered your life event
into four-photos strips. Is that what Zoltar’s doing?
I need change for another go.

The popcorn lady says no purchase, no change.
At ninety-five cents, there’d be no quarters.
Cotton candy, the same. The balloon guy:
I buy five, get my quarter, give them to a boy.

As I leave, I hear his sister:
Billy, where’d you get those balloons?

Will Zoltar know me when I return?
What if someone got there while I was away?

Hey Zoltar, it’s me. I’m back. Remember me?
I’m channeling Tom Hanks as I deposit my quarter.
The crystal ball lights up. Zoltar’s eyes move;
widen at me. A beefy hand grips my shoulder,

spins me around. A sunburn with clenched teeth
shakes the strings of five balloons in my face.

What’s the big idea giving my kid these balloons?

Eventually, the deer, turkeys and raccoons got accustomed to me;
started slipping out of the trees and high grass, up to the porch
to take corn and bits of fruit, or to drink from the birdbath, sometimes
just to see what I was doing sitting in my chair with my book and coffee mug.

Might have been the bribes that kept them coming back—
but there was that doe one late spring, that gave birth to twins outside the kitchen.
I called her “Bright Eyes,” and every year after that she brought her fawns
for me to see, then bedded them down among the wildflowers pouring
blue, purple and yellow down the hillside while she went to browse.
Morning sun slipping up behind the little ones lit their ears in the foliage—
pink antennas listening for her return.

It was hard, very hard to sell that place
to exchange it for this high desert. The few trees
crouch so far apart, you can easily see the mesas
across the Rio Grande—laid out like foundations
abandoned by ancient gods. The trees shelter a few birds,
but mostly just clutch the sand, hunkering over it
to protect their water rights. Even cactus struggles
up here. I’d heard about wild horses, but never saw
more than a few light-bronze droppings and wind-sifted tracks
on the trail down into the arroyo.

But this morning, as I set my book on the counter
and raise the kitchen blinds, a bay mare is looking back
from outside the garden wall. Motionless as a guilty child,
there’s dirt on her back like a winter coat of frost.
As I rinse the coffee pot, another mare
comes from behind a large juniper. Side by side,
they stare as I fumble paper filters with glances
to see what they are doing. From a stand of cedars

at the bottom of the ridge, a pinto, black and white
with coffee-colored markings, trots in. There’s a low spot
in the earth, and she lays down in it for a dust bath.
When she stops and rests, a gray bends down
and lays a foreleg across her back—which gets her up.

A brown yearling with a punk mane joins the band.
I’m thinking of taking my coffee out on the porch
but, as I’m spooning the grounds, a stallion appears.
White and muscular, with floor-length tail,
he stands apart, ears scanning. His sides rise and fall
as his nostrils flare. I decide to watch.

The bath must be irresistible. Another mare
lays down in the same spot, rolls in the dirt.
One after another paws a little mound,
flops down on it. At one time

there are three mares and the yearling
squirming on their backs, hooves up,
hind legs spasmodically kicking
like a small dog’s when you reach
its ever-so-needful spot. The dust
that drifts around them nearly submerges
the yearling. It’s like mist on a morning pond.
As I add the water and switch on, they shake off
in a brown fog.

It’s the stallion’s turn. He scrapes at the earth.
then kneels, first the left foreleg, then the right,
and as he lowers his hind legs, he is close,
so close to a prickly pear cactus. I hold my breath.
He rolls onto his left side, then his right—cringingly close.
Coffeemaker beeps; I ignore it. It’s remarkable
how such a large body, even when off its feet,
can be so precisely aware of the space it occupies.
One more flip, and he’s up. Shakes off.

Unable to look away, I fumble for my mug. The stallion
turns toward one of the bays and, with no visible signal,
she starts down the trail into the arroyo. The band follows
in single-file, the pinto running to catch up—
dust streaming from her back. 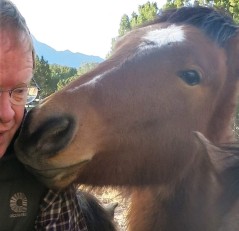 John Hicks is an emerging poet: has been published or accepted for publication by: South Florida Poetry Journal, Valparaiso Poetry Review, Bangor Literary Journal, The Wild World, Two Cities Review, Blue Nib, Poetica Review, and others. He holds an MFA in Creative Writing from University of Nebraska – Omaha, and writes in the thin mountain air of northern New Mexico.

Dealing with Burn-Out, struggling to find creative juice, I’ve prescribed 3 steps for my self… metaphorical and somewhat literal.
The fall is my jam. I’m ready for the cool, the layers, the boots, the bursts of color.
Pandemic is a 4 letter Word
Oooh, Kansas. Now you’re just showing off.
“Oh. Were you doing something?”
I love coming home.
Follow River City Poetry on WordPress.com