These are the voices that heal
the day’s wounds at night:

train traversing the edge of perception,
moaning blue from indigo to black,

wind lisping its way through wisteria,

raindrops testing the tuning of pails,
splashing into puddles that shimmer
like a membrane separating parallel worlds;

The new knife is a serrated,
heavy razor. He allows its heft
to carry it through the ripe
tomato, uses his hand merely
as a pivot, a fulcrum, a
turning point, just the way he allows
life to happen, events to drop
into place, with never a thumbs
up, thumbs down, with never a push,
a nudge from him, never a lean
to left or right, a raised eyebrow.
a nod, an inclined or tilted head.

He imagines letting the knife ride
on the corrugated tendons of
his wrist, drawing it across,
watching it wobble up and down
over gristle, blue veins, imagines
it slicing, each serration sinking
lower, viscous blood leaking
onto the cutting board, slowly
dissolving into the tomato’s
watery leavings. He wouldn’t
have to push down at all, he
thinks. This weight, alone,
would suffice.

“… one Mayfly’s day holds
one eternity.”- Mark Zelman,
from his poem, “I Could Say”

Mayflies rise
from water like mist,
mark the still air’s breath
with long thread-tails,
kite and drop and dodge
and dance the day’s
delirium.

The water, dappled
where they left
diver’s suits
of crumpled skin,
lies gold-foiled,
mirrors their flight
in circular intersections,
captures,
in the Mayflies’ leaving,
their eternally vanishing
reflections. 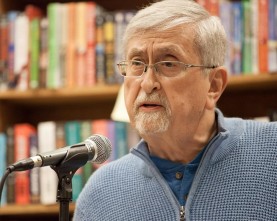 Roy Beckemeyer, from Wichita, Kansas, has recently had poems published in The Midwest Quarterly, Kansas City Voices, The Syzygy Poetry Journal, Dappled Things, and  I-70 Review. His collection of poetry, “Music I Once Could Dance To,” (2014, Coal City Press), was selected as a 2015 Kansas Notable Book. He won the 2016 Kansas Voices Poetry Award, and was Kansas Authors Club Poet of the Year for 2016.

Patio drinks in celebration of the new issue of River City Poetry. Cheers ya’ll.
Cover shot
2020.
A Rylan in the fore, a Compton in the background, a request for poetry submissions in the post.
I’ve heard stories...
Even in the drive-thru. #kansasbeatsthevirus #maskuptopartydown #maskarade #wichitacreative #ictpoetry
Follow River City Poetry on WordPress.com