I meander from bin to pile to table.
as I collect bits and pieces and
scraps and fragments of this and that,
an armload, more or less, at a time

and cart my loads to my small space,
a couple of feet on a table in a room of
long tables, in a workshop of collage creation.

Among it I’ve got a faded piece of pink corduroy fabric,
scraps of printed material, newspaper and maps,
bits of twig and wrinkly leaf, all
next to a tray of tubes of acrylic paint.

Call it makings.
The workshop leader suggested
bits and pieces of
whatever strikes you.

The tubes of acrylic paint, and a piece of hardboard,
come from a friend, along with paint brushes
and a palette knife I was told I might find some use for: perhaps.
First I handle the brushes, one at a time.

All feel too heavy or too light, none quite right.
Then I heft the palette knife. I like its feel. So
I open tubes of paint and squeeze colors,
blues, reds, yellows, greens, on a scrap of paper.

And with the knife, I smear colors, a little of each of several,
here and there on the hardboard, and press bits of
fabric, newspaper, map, twig and leaf into
bits of paint. The printed pieces go on sideways.

Mix more colors on the hardboard, smear it around,
and stop and look for what to do next, and
realize it’s done.

When we found him,
lying gowned and looking lonely,
in that hospital bed,

and made the noises,
all gummed and garbled,

that were what he could manage
from the hole
that was what was left
of his mouth,

of what had once been
half his lower jaw,
lost to lip cancer years before,

I listened close for meaning.

Then behind me I heard talk
between Mom and a nurse.

He’s been stroking since yesterday
Likely doesn’t recognize you.

and that tight grip on my arm
was just an empty clutching. 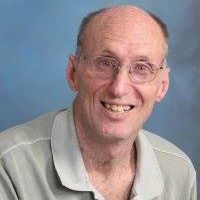 David Cook is a new voice in River City circles, published previously in Broadsides. He has written poetry, mostly narrative free verse, for about five years starting from a creative writing course and two workshops.