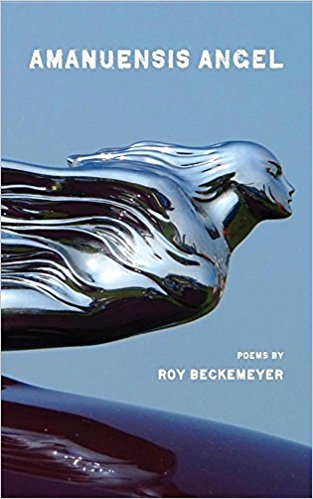 Several years ago, a well-meaning critic and reader gave me feedback on several poems where the speaker of the poem interacted with technology.  Sometimes the interaction was trivial, just a demonstration of the ubiquity of cellphones. But in one poem, the narrative interaction WITH television news WAS the poem.  “April,” she said, “people come to poetry to escape all that.” I think she believed that poetry, and Kansas poetry in particular, should be pastoral. This bothered me, intrinsically, but I couldn’t have articulated why at the time.  I think she inadvertently invalidated my own way of experiencing and interacting with the world, as if to say that technology was somehow antithesis to poems.

But as Roy Beckemeyer’s latest collection articulates, poetry is never created in a vacuum.  Technology can be embraced to both enhance and drive that conversation between the poet and the world.  Each poem is created to ekphrastically interact with art in the public domain or under fair use guidelines.  Poems are paired with both QR codes (a little like grocery store bar codes) and urls. And Beckemeyer encourages readers to read with cellphones and laptops nearby so that the inspiring images can be pulled up and seen in tandem with the poem, a dual experience.

The poems run the emotional gamut.  While the book may use the artistic imagery of angels, the poems aren’t limited to the angelic or celestial.  Angels function as apocalyptic heralds, gate-keepers, judges.

From the opening poem and image:

Angel: Salvador Dali
Excerpt from Angel of Chaos
I am a solution to the three-body
problem of Father, Son and Holy Spirit.

But I ramble (and how appropriate).
Watch me respond to strange attractors,

Like angels in flight, the poems swoop and swirl through human tragedy and experience. Beckemeyer attempts the tonal quality of each work, although there are times when his ‘fancy’ leads him to provide narrative and story to the symbolic representations angelic brethren.

Nightly he dreams of falling,
feels his own orange glow.
He is a re-entry vehicle.
The oxygen-rich air rubs
his skin into flame. Clouds
sizzle, ionize at his passing.
The blue sky purples. His
wings, his glorious wings, take
on a charred and blackened
hue. He awakes to find,
from dreams, truth.

This is a collection worth visiting time and again, as the nuanced relationships between the poems and the inspiring angelic artwork becomes more dynamic over time.

Roy J. Beckemeyer is a retired engineer and scientific journal editor who lives in Wichita, Kansas.  He currently studies the Paleozoic insect fossils of Alabama, Kansas, and Oklahoma, and writes poetry.  His first book of poetry, Music I Once Could Dance To (Coal City Press, Lawrence, KS 2014) was selected as a 2015 Kansas Notable ook.  He won the Beecher’s Magazine Poetry Contest in 2014, and the Kansas Voices Poetry Award in 2016.  He recently co-edited (with Caryn Mirriam-Goldberg) Kansas Time+Place: An Anthology of Heartland Poetry (Little Balkans Press, Pittsburg, KS 2017).  Signed copies of Beckemeyer’s books may be purchased at his Author’s Page: royjbeckemeyer.com”

Yeah. #poet
My camera on my phone did NOT know what to do with this red September moon at dusk. #nofilter #onfire #harvestmoon
Full transparency, sometimes the process means sitting here, staring at the blank page, and hoping that some words will stop by to visit.
Since the spring, I’ve occasionally listened to the podcast Benevolent Instruction by @mina3est and @cocola72 —even though I’m 100% NOT a dancer and have no idea what I should be ‘doing,’ there’s just something about the voices and direction that I’ve found soothing. [I’ve also recently discovered that I’m very much audio-activated and an audio-learner EVEN though I’ve thought of myself as verbal/linguistic my whole life… but I digress].
Hanging out with some of my favorite dapper poets & writers this afternoon at the Advanced Learning Library here in Wichita. Great to see @rabbidude
Ya’ll, I don’t even know what was happening here but I watched this saga for a good 5 minutes, this weird blue insect dragging a dead (or nearly dead) spider along behind it. For scale, I’d say the spider was a little bigger than a quarter.
Follow River City Poetry on WordPress.com