Walking in-step
to the fall of rain, to the pace of thoughts
to my husband’s hands kneading music
on the keys, Rachmaninoff’s Rhapsody on a Theme of Paganini

and I keep time in the kitchen
loyally waiting, rapturously listening
with one hand to my heart
and the other to the taut pull of stomach

against a deeper, slower beat
the bass against the treble
my own heart being picked up
and translated into the meld of two sounds into one.

A buck appears—
imposing shape
and shadow—eating the Housmans’
grass with stark effrontery. Its ivory-tipped
crown shines eight stars. Housman summons
his children into the kitchen. The oil
in the griddle spatters and smacks.
A breakfast parade of coffee-grimed
mugs, glossed eggshell, and jam
halts on the counter. They watch—
Sadie with her camera—the august, almost
human face beneath the ballerina arms
of antlers, circling its crown
like a halo. It bows
its sublime head, stilling the ghost breaths
on the window. When Biscuit
howls the buck sails,
legs sweeping on the tides
of an invisible current. Its white tail
blinks out in the mesh of maple
and yellow gingko. The Housmans stand
for a second—the beagle whining—
and begin stirring to life—spooning
the egg batter into the griddle.

Sky Chord
The title “Sky Chord” was taken from the acrylic painting by Sam Gilliam, 1966.

streetlamps, sidewalks, cigarette stands
in an impressionist haze
erased and reformed before us with each

swipe across the glass,
water dancing
in the strobe of headlights.

In a sheen of sweat, in blood,
I sit with you, sweet babe,
in the muted spell between thunderclaps,

of rising rainwater
against our stalled car
six miles from the hospital.

If sound had a color
that could leave its mark,
then you, my love, offer up

a spangled cacophony—
your breath the hazes of blue,
your screams as bright as the blood

passes over the now slumber-pink
hues of your
perfect face. 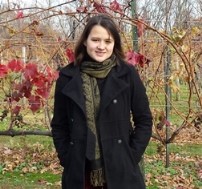 Shannon Nakai is a native Kansan, poet, violinist, teacher, and traveler. After graduating with a degree in English and TESOL, she spent a year as a Fulbright Scholar in Turkey. Currently she is earning her MFA in Creative Writing at Wichita State University. She was a finalist for The Atlanta Review‘s 2015 poetry contest, and her work is featured in The Bacopa Literary Review, Touchstone Journal, and most recently in Kaye Linden’s Thirty-Five Tips for Writing Powerful Prose Poems. She lives with her husband in Wichita.

Watching that SNL with Betty—seems like a good way to say bye to 2021.
Entering a period of reflection: asked “What should I be focused on for the next few days as I reflect, renew, and set goals?”
Cloud Art on the road this morning—wish I knew all the names of my friends.
Beth Gilstrap in the recent Poets and Writers: “When I am too tired from performing hope;” I was so struck by this line, that even though she wrote of being a caretaker for her dying mother-in-law, there was this parallel for me…
Whatever your holiday traditions, may your feet fair better than his by the end.
I have wanted one of these trees my whole life.
Follow River City Poetry on WordPress.com